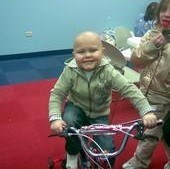 Colevin John is a beautiful, smart, and outgoing little 5 year old boy. On December 13th 2006, he was diagnosed with Acute Lymphoblastic Leukemia. With a great team of doctors and nurses at Children's Memorial Hospital and the support of family and friends, he put the cancer into remission on January 13th 2007. He was doing great, attending Kindercare Kindergarten, playing T-ball, soccer and becoming a green belt in karate. In the beginning of December of 2007, Colevin started becoming very ill again. He was complaining of constant headaches and not knowing any better, everyone thought he had sinusitis and was being treated for that and a cold. On December 13th 2007, exactly one year to the date he was diagnosed, he was scheduled for routine spinal tap and that's when they caught it. Colevin's cancer had come back but this time it had come back in his nervous system and the cancer was circulating around his brain and spine. We were devastated but we all stayed strong for him. They hit him hard with different chemos and other cancer fighting drugs and on January 17th 2008, he had put the cancer back into remission. He still stays strong fighting the cancer and although we spend a lot of time in the hospital with treatments and being sick, he still manages to keep a smile on his face. At just 5 years of age, he has become a hero in our family and we thank God everyday that he is still with us staying strong. From the bottom of our hearts, we want to thank everyone for their continued support and as Colevin would say "I will kick cancer in the butt!"

Hi! My name is Maxine Perez. I'm 20 years old and I attend college. The first time I was diagnosed with Leukemia (Acute Lymphoblastic Leukemia), I was 12 years old. I was in remission for almost 6 years. Unfortunately, I was diagnosed again with ALL in Jan 18, 2008. This time my doctor and his colleagues agree that a bone marrow transplant would be the treatment of choice to save my life. I and my family agree. Fortunately, two of my siblings are perfect matches for me to receive a transplant. In the mean time, I am presently undergoing the usual Leukemia treatment, chemo, radiation and many hospital stays to get the disease in remission and to prepare my body for the bone marrow transplant. I feel blessed and lucky to have all the support I need from my family, friends and even strangers that don't even know me and it gives me the strength, courage and confidence to keep fighting and conquer this terrible disease. I have a whole life ahead of me and I'm not ready to say good bye.