⁠⁠Brendan turned 7 on July 19, 2021. At the beginning of August, he started getting bad headaches followed by nausea and vomiting. On August 21, after an ER visit, he was diagnosed with Medulloblastoma (Group 3) and had brain surgery on August 24. September 7 Brendan was back in the hospital due to complications from his surgery. He is currently going through a 36-week treatment plan. This includes 6 weeks (5 days a week) of radiation and chemo, which he has completed. He is now going through 6 cycles of 4-day hospital admission chemotherapy treatments. Each cycle is 28 days. To date, Brendan has spent 28 nights in the hospital and will most likely have another 12-15 nights ahead of him. This has obviously impacted our family in multiple ways. Brendan has three other siblings ages 11, 19, and 21.  Emotionally and financially, our world has been turned upside down. The most important thing right now for our family is seeing Brendan’s beautiful smile and giving him the love and support to get through this. Irving is a strong, wonderful young man who we are proud to call our son. He has been very incredible and helpful in our family throughout difficult times. He is a creative, fun, kind and energetic person to be around with. He was living the best moments of his life the first half of last year and it’s also the second half of that last year is when everything changed for him.

A few weeks after celebrating his 27th birthday in August, he started to have back spasms and night sweats. He has never had any severe issues in the past like this and thought it was just temporary back pain. A week went by and when we saw that he was still having those spams we knew something was wrong. We did see the doctor who couldn’t find anything wrong with him and prescribed some Tramadol for the spasms. Over time his condition just kept getting worse. The spasms turned into back pain, severe night sweats, excessive weight loss and loss of appetite. On September 19th, 2021 the back pain got to the point that it became unbearable we went to the E.R with him at Good Samaritan Hospital in Downers Grove IL . They ran all sorts of tests and scans on him where all the problems and symptoms pieced themselves and lead to the horrific outcome. The back pain is due to a bone fracture in the lumber spine, due to a tumor mass in his abdomen and pelvic area and squeezing the life out of him. We can’t even imagine the pain & physical hardship he has gone though.

On October 1st 2021 Irving had been diagnosed with Hodgkin’s Lymphoma. After looking at his health chart and getting A 2nd opinion from Cleveland Clinic, they have decided to put Irving in a chemotherapy treatment plan for 6 chemo cycles for 18 weeks (1 infusion every 3 weeks) at Good Sam’s Cancer Outpatient center which he has recently completed. In between the infusions the oncologist ordered a kyphoplasty for Irving because the mass managed to push its way into his lower vertebrae causing it to collapse. After seeing the oncologist on February 25th for a follow up visit after the last infusion & PET scan, the doctor informed him that he still has active lymphatic scar tissue in his abdominal area & after seeing the radiation oncologist they decided to go with radiation therapy. Irving is currently on a treatment plan to receive daily radiation for the next 3-4 weeks.⁠

This unfortunate turn of events has really changed & impacted the way we live as a family physically, emotionally, financially & spiritually. We are proud of Irving and the way he has managed to approach and adjust towards his new lifestyle and recovery and we will be there every step of the way. My son Julian has been my rock since his dad passed away when he was very young. He’s absolutely an amazing man inside and out which is hard to find these days. Julian has helped me out tremendously as being a single mom he takes a big role in his little sister's life. He’s the man of the house. Last year in August he was complaining about having back pain; a few weeks later he was still complaining to the point where I took him to the hospital they told us it was growing pain. They sent him home with muscle relaxers and we got him a back brace. Said to give him ibuprofen for discomfort. Weeks went by he was then crying for my help so I took him back again and they did more tests found nothing and sent us home. His twin sister's birthday was November 13th as he was in so much pain I asked him if we can go first thing tomorrow if you think he can get through today for your sisters. He did... I knew something was wrong as he was losing weight quickly everything was worse... it wasn’t the same Julian…the boy who always wanted to hang out with his friends the boy who played football.

On November 14th I took him to a different hospital feeling like John Q not leaving this hospital until I get answers on why my child is in so much pain!

I’ll never forget when they said to me your son has cancer!!! I was in complete shock! The worst news possible a mother could hear. They then sent us straight to Lurie’s children’s Hospital in Chicago. He was diagnosed with a testicular cancer rare germ cell which we then found out it spread to his liver, lungs, limonoids, and brain! We spent 5 days there, 3 of them Julian had no idea why he was even there until he saw what floor he was on! I remember walking around with him in the wheelchair talking to him about how proud I am of him and who he has become right there he looked up at me and said mom you know why I am the way I am it because you raised me right! My heart was happy and my eyes were full.

My kids are my life. 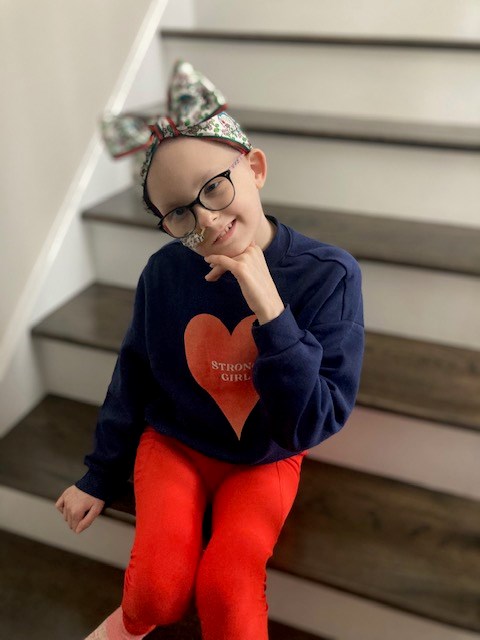 The day after Mother’s Day of 2021 is a day we will never forget. Our Sassy Sweet 10-year-old daughter was immediately rushed to Ann & Robert H. Lurie Childrens Hospital after a large mass was found on a CT scan. Upon our arrival at Lurie Children’s Hospital, Sophia received a full brain MRI and immediate surgery to drain fluid build-up on her brain. On May 12th, Sophia underwent extensive brain surgery and we received earth-shattering news in the form of a single word, Medulloblastoma. While the surgery was successful, due to the tumor’s location in the cereberum upon waking up, Sophia was unable to communicate with her doctors and family due to Posterior Fossa Syndrome, a condition that occurs in 1 out of 3 children following surgery for a brain tumor and affects speech and language, motor skills and mood. In just 36 hours our daughter went from a healthy, active girl who was a competitive figure skater to a girl with brain cancer who could no longer talk, walk, voluntarily move or swallow.

Sophia spent 3 weeks at Lurie Children’s Hospital recovering from major brain surgery and then was transferred to an Inpatient Rehabilitation Facility to receive Speech, Physical and Occupational Therapies. During her 8 weeks at Inpatient Rehabilitation, she also completed 30 proton radiation therapy treatments with weekly chemotherapy. Sophia was transported by ambulance every day to her appointments.

Sophia was released from Inpatient Rehab in mid-July and the same week her brother, Anthony came home from a yearlong deployment with the US Army. Not having her only sibling with her was hard but tears of joy were shed that day.

Sophia currently attends Day Rehabilitation, 3 days a week while keeping up with her homebound schooling.  She is on a 52-week chemotherapy program, 9 cycles and each cycle is 3 treatments. Treatment is expected to end in July of 2022.

The way Sophia continues to deal with her treatment is nothing short of incredible. She has been forced to grow up in a hurry but has handled it with such grace and dignity.

Posterior Fossa Syndrome has created many disabilities for Sophia and will require more surgeries in the future. We as a family fight with her, and beside her. She is the strongest person we know. She is #SophiaStrong.